I have spent a month here working on the boat each spring for the last five years. The staff is Turkish, the boat owners are from all over the world. Cener, 30, university graduate at the “Marine Shop, Yacht Equipments” where I buy everything speaks excellent English. I often wonder what it would be like trying to explain what I wanted in Korean. As the song goes, “We don’t know how lucky we are, boys, we don’t know how lucky we are.”

A couple of years ago my boat neighbour was English Chief Detective Inspector Trevor (retired). There was a little French speaking Swiss man whose boat was in perfect boat show condition who thought it was his God given duty to instruct lesser mortals like me and CDI, in French, on the finer points of bottom paint application and fibreglass polishing. Although he may have been well intentioned, both CDI and myself were enjoying our time here without our wives giving us instructions. The last thing we really needed was a man masquerading as a wife, giving us instructions about relatively trivial stuff, and giving them in French.

The Turkish manager of the boatyard here, Gunhan, an amiable fellow who speaks good English, walks around carefully trying not to get lured into conversations that may be tricky or require a definite answer. Like, “What is the rate for electricity?” on the newly installed meters (electricity not previously metered). This brought an answer of “Metered”, and no further interest in the question. I thought about this and the last time the little French speaking Swiss man came by to profer some advice I was tempted to respond with my best impersonation of Manuel from Fawlty Towers – “Que?” The following season CDI told me that our Swiss friend was required by the restaurant owner at the Greek island of Nisiros to “Speak Greek or English!”—and his English was better than CDI’s and my French.

Heading off where the next languages will be Greek, Italian and Spanish. Unless somebody out there speaks English I won’t be getting a beer until somebody understands “Dos cerveza por favor.” What a wasted winter! I could easily have signed up at Mary’s Language Exchange (www.maryslanguageexchange.com) and learned enough to converse with the natives and make three new friends. Dang.

After weeks of work it was time for Van Kedisi to return to the Mediterranean. This likely is the last time that VK is lifted out of the Yat Lift yard near Bodrum, Turkey.

I anchored off the castle in Bodrum and started up the new water maker I just finished installing. The lift pump would not start. It kept blowing fuses. I took it apart, freed up the impeller and polished the inside. We now have a working water maker. 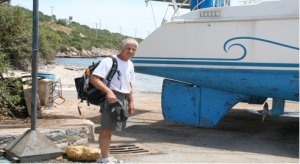 I travelled business class to Amsterdam. The lovely stewardess efficiently managed my blood alcohol level. The flight to Istanbul was less rewarding. The carousel stopped without disgorging my 3 boxes containing a water-maker and safety equipment. Eventually, while I was in the Lost and Found filling out forms the boxes were delivered to the carousel area. The customs people put them through the X-ray but then lost interest and did not make me open them. Two o’clock in the morning shift can do that.

Istanbul was quiet after the protests in Taksim Square. At the Empress Zoe Hotel, Ann said the protests were a shock at how quickly they happened, how polarized the country is and how much the two sides dislike each other. Polarization in Turkey should not really be a surprise. To the east is Iran, with a hard line Islamic autocratic government and to the west is Greece with arguably the most corrupt western democracy. Our friend Hasan in the Arasta Bazaar struck a more positive note. His business partner was at Taksim with the protestors, while Hasan supports the Prime Minister. They continue as partners respecting each others view. A lot of parts of the world would do well by this model.

Bus to Bodrum was an uneventful 13 hours. At Yatlift the boat looks fine – 17 years in Turkey and nothing stolen – ever. Sad to leave – but, it is time. So the work starts to install the water-maker and other “boat presents” – Rick’s term. The weather is a balmy 40 C at midday and no clouds.

David, at Yildiz Yachting, has kicked at the Bodrum Marina’s latest 30% increase in rates. Last year when I had the Van Kedisi in there it cost 80 Euros a night with an extra 15 for internet. David has negotiated with the authorities to install two 20m x 4m x 2m concrete floats at the new pier at Bitez and will run his charter operation from there. Rick advised that Yener will also move after some 20 years in the marina. The marina seems not to worry, there are more boats on the waiting list.

Getting a boat ready to voyage these days takes 2 years according to a guru at the Blue Water Cruising Association – all that gear that is somehow indispensable. 20 years ago it took 6 months. Today you need to be an electronics expert and mechanic. The engine kept turning while I was installing the drive pulley – so I went to the cockpit and put the engine in gear – ha ha – takes a couple of days to get re-calibrated!! Sometimes sailing seems to be secondary – still getting this boat that does not like going to windward under sail or engine will be an interesting challenge with the wind blowing mainly from the west every day in this part of the Med. There is some northerly – and we only need about 30 miles per day.

Last day of the month, most of the major parts of the water-maker are installed. Design headaches finished, and Dick’s fabrication shop with vice and angle grinder put away. On to hose fitting, sanding and painting. Hopefully launch in a week. Working on my own I have become more of a Loss Prevention person – there is zero progress if injured! My hero, Joshua Slocum, rebuilt the Spray on his own (without power tools!) before setting out in 1895 at the age of 55 to sail his 36 foot sloop around the world, alone.

Dean arrives in July and we start the voyage. It will be Ramadan, but unlike Saudi where it is impossible to find food during Ramadan, here we can get an ice-cold Efes and English Breakfast with bacon and eggs at the Breeze Bar on the beach…..the protestors might say that the Prime Minister is trying to change that to the Ottoman, or Saudi model.